My optimism wears heavy boots and is loud - Henry Rollins

Benjamin Franklin famously said that death and taxes were the only constants in life.

When he did, he forgot about or failed to mention, the third constant that carries us all from the cradle to the grave, puts a wage in our pockets, and enables us to pay Mr. Franklin’s infamous second perpetual truth, taxes.

Work is the ceaseless part of the human condition that Benjamin Franklin neglected to mention, and the altar upon which all men prostrate themselves. We all work for a living, and we all wear a uniform to earn our wages.

Whether we regard them as being part of our working attire or our regular, downtime outfits, work boots are an essential part of most men’s wardrobes.

But no two men are the same (unless they’re twins of course), and we all need different sized boots for our different sized feet, whether they’re big or small, wide or narrow.

That’s why we’ve found five of the best work boots for narrow footed guys so that if you do have narrow feet (which we do), you can just choose the boots that are right for you and get straight back to work.

Are you ready? Good, then come with us and we’ll show you your new work boots… 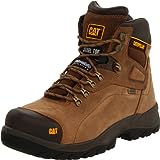 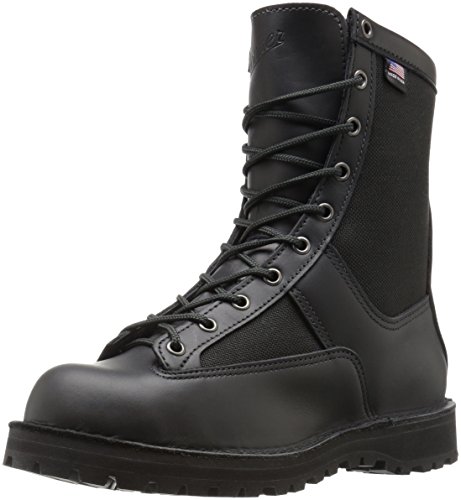 Danner has been making boots in the Pacific Northwest for nearly a century.

They don’t make footwear for the idle and shiftless, they make boots for adventurers, hikers, and the hard-working men and women of America.

Because they’ve never been a brand that does things by half, or the easy way, Danner’s footwear has found a natural home with military and service personnel.

And the Arcadia is the boot that Danner made for the armed forces, police, and security services.

Designed as a narrow fit boot, the Acadia is built (because all good boots are built, rather than being “made”) using Danner’s world-famous stitch-down construction which makes them incredibly stable and long-lasting.

At eight inches high, these boots are engineered to support your ankles and heels, and the breathable mesh that their uppers are fashioned from means that you’ll be able to wear them all year round, come rain, wind, or snow.

The Vibram Kletterlift outsole has been fabricated to provide traction in any environment, which means that when you’re wearing a pair of Acadia, you’ll never lose your footing.

There’s a reason that law enforcement officers tend to favor Acadia, and that’s because they’re a boot that gets the job done and does whatever the person wearing them needs them to.

Acadia are made to take whatever life throws at them, shrug it off, and just keep on going. If you want to be the best, you wear the best, and that’s exactly what Danner’s Acadia’s are. 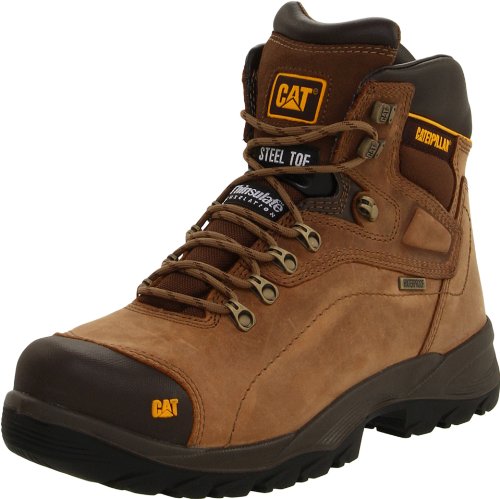 While Caterpillar is the world’s leading designer and manufacturer of industrial equipment, they’re also one of the premier designers of work boots.

Their footwear is built to the same exacting standards that all of their products are and is made to take the same sort of punishment and abuse.

But somewhere along the Caterpillar journey, their work boots took on a life of their own and became more than just the chosen footwear of the working man., and they found an unprecedented level of fame among those who wanted to look good in, and outside of, work.

A burly boot, the Diagnostic is built from the ground up around Caterpillars ERGO comfort system, which is designed to combine comfort, flexibility, and stability.

These six-inch-high steel toe-capped work boots are waterproof, thermally insulated, have slip-resistant outsoles and, should you find yourself caught in an electrical storm, will also protect you from the dangers of adverse current and voltage.

They are, as an infinitely wiser man than any of us once said, the whole package and the real deal.

Stylish and functional, Caterpillars Diagnostic have earned their stripes the hard way and have proved themselves to be a top tier workboot of choice the world over, time and time again.

They’re made to be hard-wearing, and given their sterling reputation for quality and durability, there’s every chance that if you wear them, your boots will probably outlast you. 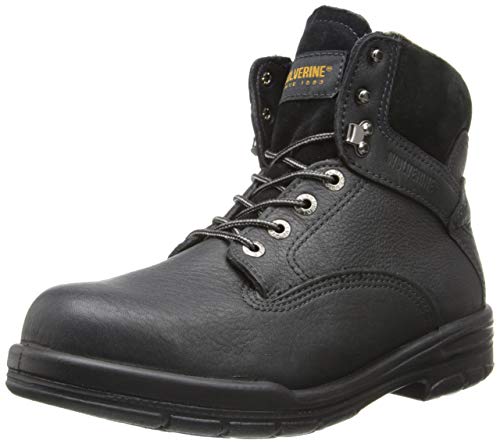 Established in 1883, Wolverine is an iconic American brand. They exist to support the men and women who forge their path in life and stop at nothing to build the future that they want.

And their DuraShock work boots epitomize everything that the brand stands for and believes in.

These steel toe-capped, fully weather-proofed boots have a mesh interior that’ll draw the moisture out of your feet while they rest squarely on their dual-density soles that are as comfortable as they are hardy.

High enough to fully protect your ankles, the only thing that you’ll have to worry about while wearing Wolverine’s DuraShock boots is the fact that you’ll never want to take them off. Which presents a whole other set of domestic problems that nobody wants to even think about.

Thanks to their commitment to using superior materials, innovation, and their relentless craftsmanship, Wolverine is acknowledged as being industry leaders in the field of work boots.

And if you give in to temptation and slip into a pair of DuraShock boots, you’ll end up becoming another convert to their cause. Which, despite what you’re thinking, isn’t a bad thing at all. 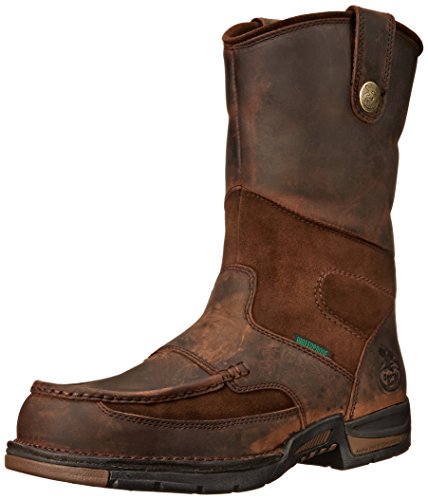 Georgia claims to be America’s hardest working brand of boots and having worn a few pairs of them in our time, it’s pretty hard to find fault, or argue with them.

While the idea of a slip-on work boot might seem a little strange, once you’ve tried Georgia’s Athen’s for a while, you’ll start to wonder why you ever bothered with laces.

The Athens is a ten-inch high work boot that’s designed to surround your feet in luxury thanks to it’s EVA midsole, AMP (advanced memory polyurethane) insole, and rubber outsole that provides more stability than the foundations of the Sears Tower.

Fashioned from waterproof leather and suede, these boots are made to be every bit as hard-wearing as you are hard-working, and won’t quit or let you down.

They’re made for the blue-collar man to wear whether he’s on the job or just kicking back and relaxing at his local bar. Whatever you need them for, Athens has it covered. 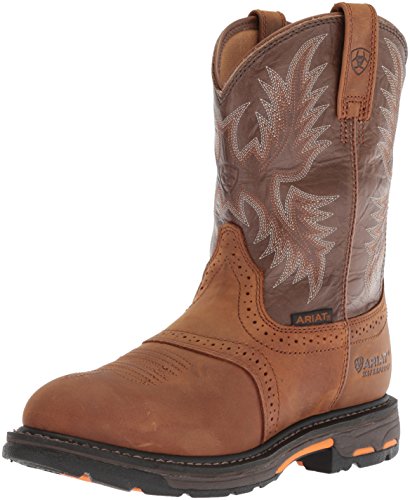 We’ve already made our position about slip-on boots clear, so in case you missed it for whatever reason, we’ll share it with you again.

We’re big fans, and the Ariat Workhog takes the slip-on work boot to a whole new level by making it a little bit more country.

Although they began life as an equestrian clothing company, Ariat some realized that they could transfer everything that they’d learned about making horse riding boots into different areas of footwear.

That decision gave the world the Workhog, a fully weatherproofed, durable leather boot that uses gel systems for comfort, has a nonslip and self-cleaning heel, and uses Ariat’s patented U-Turn Entry, which makes it easy to slip on and off, but guarantees that the boots will stay on your feet until you’re ready to take them off.

The outsole is cushioned, provides incredible support, and is also oil-resistant, so you can work on your truck and car and not have to worry about engine leaks spoiling your boots, and your, day.

When you need to indulge your inner cowboy and let him loose in work, the best way to do it is with a pair of Workhog’s.

What Are Work Boots?

While they were traditionally fitted with a steel toe cap to protect feet, modern work boots often use different composite materials to fulfill the same role that steel did which makes them lighter, and often more flexible than conventional work boots.

Made to be comfortable, durable, and tough, work boots while still part of orthodox working attire, have also become increasingly fashionable and have found a new fanbase with people who want affordable, long-lasting boots that are suitable for any, and all, occasions.

They are at the epicenter of the collision of the industrial world and fashion world, and as such, work boots have become cherished, and much sought after, by everyone from mechanics to bastions of modern industry.

Which Work Boots For Narrow Feet Are Right For Me?

It’s a given that, like us, you’ve probably got narrow feet. But that’s not a problem as far as work boots are concerned, as our list has already shown you.

The only things that you need to consider when choosing your work boots are your budget and personal taste. Choose wisely according to the latter, and stick rigidly to the former.

That said, if you were looking for our advice, and wanted to know which boots we’d recommend, we’d always point you in the direction of Caterpillar and Georgia Boots Athens.

They’re both incredibly versatile, affordable, do everything that a good work boot should and they also look good.

And just because you’re working it doesn’t mean that you, and the boots you’re wearing, can’t look sharp too.

We use cookies to ensure that we give you the best experience on our website. If you continue to use this site we will assume that you are happy with it.OkPrivacy policy